Just added to your cart

Let's continue our discussion of the Sabaj A20d 2022 today as we dive into the core of  the DAC's PCM resolution characteristics. You might want to review Part I as I had discussed much about the hardware itself, the filter options for the device, and jitter already.

As per my typical procedure, we can start with using the RightMark Audio Analyzer suite to compare this device with others. This will provide a good start looking at key performance characteristics. 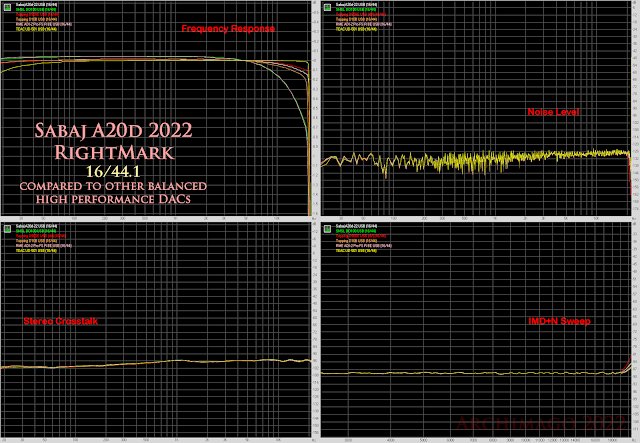 If you've seen my other reviews in the past, these 16-bit results should come as no surprise at all. When comparing the Sabaj with other high-resolution DACs, using low-noise balanced (typically XLR) outputs, the standard CD resolution of 16/44.1 is simply not a challenge at all dating back over the last decade including a DAC like the TEAC UD-501.

16-bits resolution is really not much to ask of modern DACs these days and the graphs basically look like they're layered on top of each other with minuscule variations. Notice that the only mentionable difference is that DACs do have slight frequency response variations, but even this is less than 1dB difference up at 20kHz (and often this is a reflection of the filter selected).

This is not surprising in real-life when we do blinded listening tests (such as this from a few years back). Assuming there's nothing majorly different like noise level, excess hum, or frequency roll-off (eg. NOS), I don't think most audiophiles would be able to pick apart high-fidelity DACs these days playing 16-bit digital audio samples in controlled listening.

Moving on to high-resolution performance: 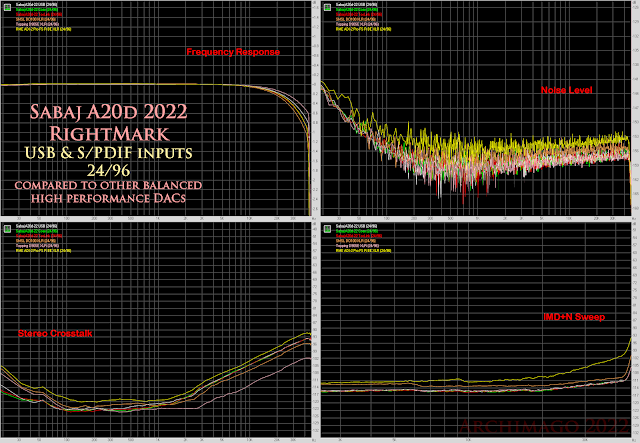 As you can see there's basically no difference in the results between the Sabaj A20d 2022's USB and the various S/PDIF inputs as per these balanced XLR measurements. Assuming one doesn't have any severe interference such that galvanic isolation from TosLink might be beneficial, there's no reason to think that any of the input options would be preferable other than that USB provides a larger range of PCM/DSD samplerates over S/PDIF.
I had to really zoom in to see the tiny noise differences between the devices. The Sabaj A20d 2022 and Topping D90SE (4V standard setting) are both ESS ES9038PRO devices and we can note just how close they are in performance - basically numerical rounding errors much of the time! 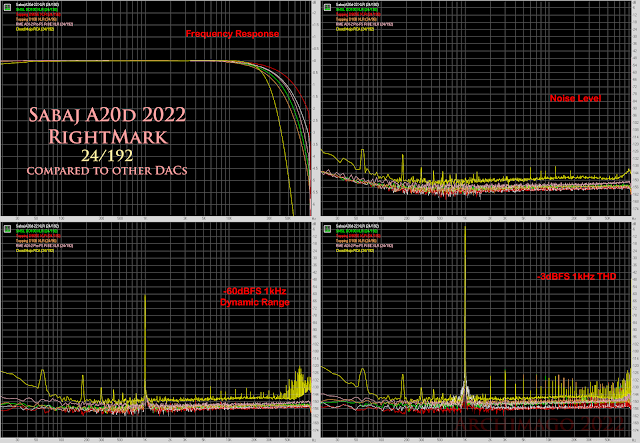 For fun, let me throw in the Chord Mojo with single-ended TRS-to-RCA cable. The Topping D10 Balanced is using the supplied 1/4" TRS-XLR adaptor. RightMark unfortunately messes up the crosstalk and IMD+N graphs at 192kHz which is why we see the Dynamic Range and THD graphs instead.
As you can see, differences between the balanced devices are low. With the Chord Mojo here for comparison, the switch between unbalanced to balanced makes a much bigger difference than the variations between high performance balanced DACs themselves.
For completeness, here's a direct comparison of the Sabaj A20d 2022's RCA vs. XLR output at the various samplerates:

RCA output on this device is very good, rivaling the XLR output (under otherwise electrically clean conditions of course). Let's have a look at the 24/96 graphs to note the differences - crosstalk between RCA and XLR with a 6' cable clearly is quite different: 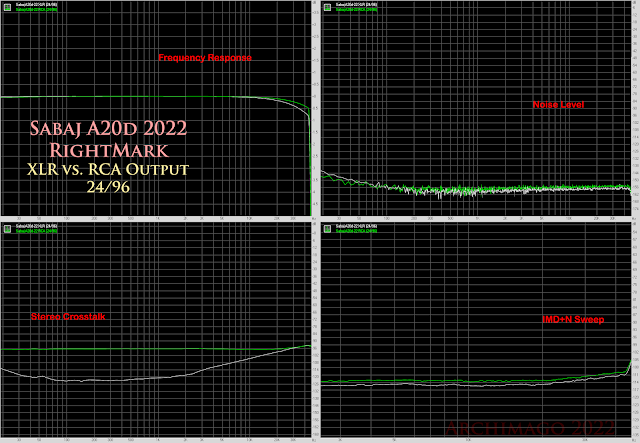 Again, impressive RCA performance with very low noise! In the testing above I took extra caution to make sure I captured as cleanly as possible as it's not hard to pick up 60/50Hz mains hum unbalanced. Nonetheless, ultimately the XLR output does provide better noise and distortion characteristics as in the IMD+N sweep illustrated.

Using a combination of the E1DA Cosmos ADC and APU, we can have a detailed look at the dynamic range and THD+N afforded by the Sabaj A20d 2022 through the XLR outputs: 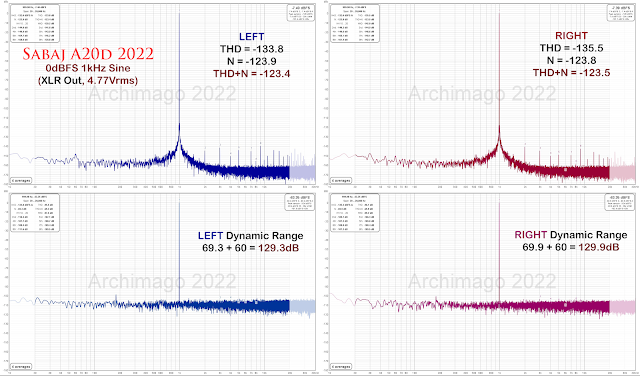 Impressive. Better than THD+N of -123dB and Dynamic Range of around 130dB.

And here's THD+N with the RCA output:

When I measured the Topping D90SE last year, it was noted that the distortion level increased with different sample rates, rising at 192kHz and above. Let's see if there's an issue here. As a bonus, let's have a look at 768kHz which is the maximum PCM samplerate (BTW, one benefit of ALAC over FLAC is that it can handle 768kHz which is what I'm playing here losslessly whereas FLAC is limited to 384kHz even though it has typically slightly better compression ratios): 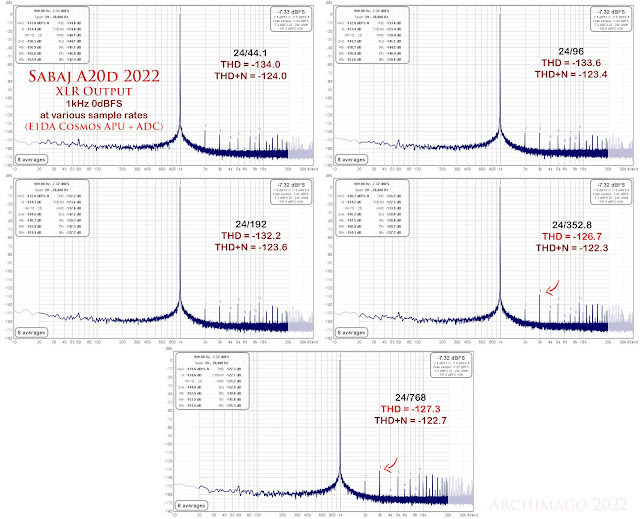 Notice that at 352.8 and 768kHz, the 3rd harmonic rises a little bit resulting in slightly higher THD. Obviously this would not be an audible issue. However I do wonder if there's a little more optimization that could be done on the ESS 3rd harmonic compensation parameters at these very high samplerates. This is considerably less of an issue compared to what was found with the Topping D90SE.

Another reminder to not get too excited just because of high samplerates, dear audiophiles! There is no guarantee that an album at DXD resolution (352.8kHz) implies your DAC would reproduce it with any less distortion than at 176.4/192kHz. This is also why it's good to have objective results because much of the time these differences would be very difficult to A/B test properly. Human testimony might in fact prefer the samplerate with more distortion/noise simply because of the psychological bias towards big numbers.

Beyond just a single readings for the 1kHz THD+N, let's have a look at stepped measurements starting with the 1kHz THD vs. Frequency Step: 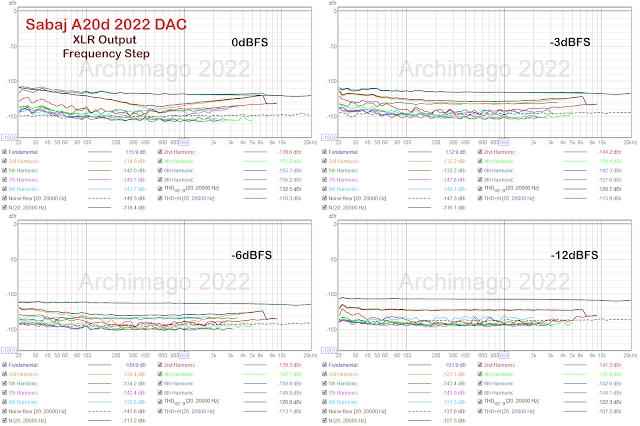 That looks good. Across the audible frequencies at levels from 0dBFS to -12dBFS, we're seeing distortion amounts staying relatively flat and the relationship between harmonics are not too chaotic. No risk of timbral shifts due to fluctuating harmonic contributions across frequencies. By -12dBFS, many of the harmonics are below the dotted noise level.

Let's now have a look at the 1kHz THD Level Step, looking at distortion characteristics from -130dBFS to 0dBFS output: 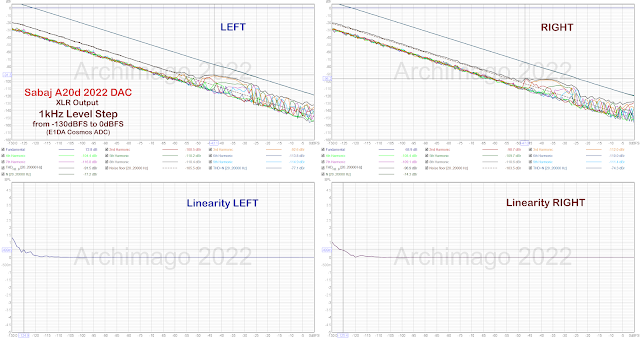 There's a harmonic distortion "hump" around -45 to -23dBFS but this is at a low-level with THD better than -90dB (0.003%); IMO nothing likely audible here. Fantastic linearity with output level deviating by +/-0.5dB down at around -125dBFS; this is about as perfect as any other DAC I've tested.

With the availability recently of IMD Step testing in REW, we can also have a look at the DIN 250/8kHz intermodulation amount across output levels:

Again, there's a mild "ESS hump" around -45 to -25dBFS. It's low level again of course with a peak amount only -80dB (less than 0.015%) around -45dBFS. Over the years, this has been seen with other ESS products; an interesting technical finding which hopefully will not be there as the DAC chips evolve further even if practically it's not audible already.

As an ESS DAC, we can also run the THD vs. Generator Level Stepped Sine at 0.1dB increments from -25dBFS to see the characteristic "dancing" sinusoidal odd harmonics across output levels as recently discussed: 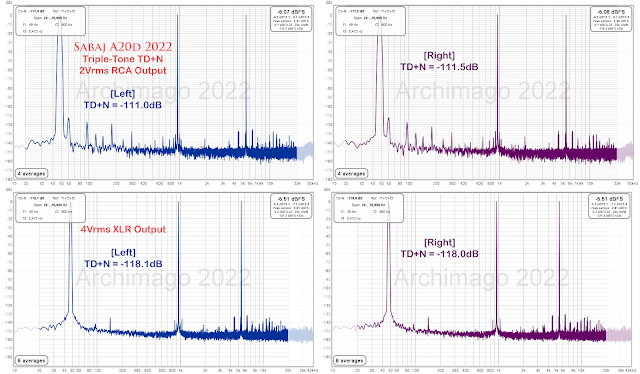 For a more complex signal, here's the 1/10 Decade Multitone 32, left and right channels: 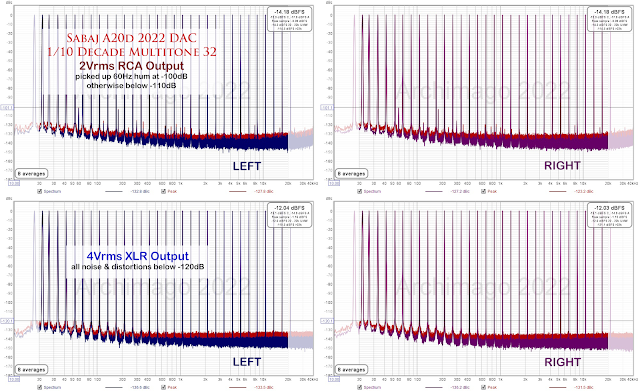 Notice that I've turned on the "Peak" tracing as well to capture the highest values across the 8-average readings. Not unusual to see some 60Hz mains hum with harmonics getting into the measurements with unbalanced connections. We're basically looking at -110dB RCA and -120dB XLR noise floor and distortions otherwise.

A complaint that I've heard among certain typically subjective-leaning audiophiles is that measurements like a simple 1kHz sine wave do not represent real music. It's too periodic and doesn't capture transient performance. While this is true, remember that there are other tests which over the years have been used to capture the accuracy of transient reproduction. In the world of amplifiers where slew-induced distortions can be an issue with sudden transients (discussed previously) and negative feedback circuits back in the old days, we can use the "TIM" test signal that looks like this as a waveform:

As you can see, embedded in the signal is that sudden transient "jump" from one extreme polarity to the other. Transient "imperfections" can be detected as +/-2kHz intermodulation sidebands around a 12kHz primary signal as per this previous diagram: 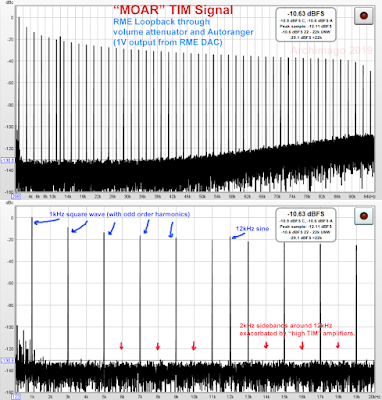 While some amplifiers perform very well on this test, typically once we hit higher output levels, these sidebands show up. For example, have a look at the Hypex nCore NC252MP measurements once output hits ~15V into 4Ω (>50W):

For fun, let's see how it looks on this DAC with the balanced 4V XLR output, at 100% volume:

As you can see, a transient signal like this is reproduced basically perfectly with the DAC. No evidence of intermodulation sidebands or other noise anomalies in the 8-average tracing with peaks turned on. The lower graphs are the same test using "coherent" time-domain averaging which allows us to look even deeper down in the noise floor, effectively increasing SNR; still nothing of significance down to about -140dB below peak signal.

The result is not unexpected of course. In a DAC, where we're only looking at transient changes of relatively few volts typically (peak-to-peak swing of ~11.3V for a 4Vrms balanced signal), there should be no issues at all with "instantaneous" reproduction of transients. For a device to reproduce this "perfectly" is more demanding than actual music where we don't see stuff like sudden extreme transient swings of this intensity (unless intentional in electronic music I suppose; even explosive cannon blasts, bouncing balls, and balloon pops don't look like this)! 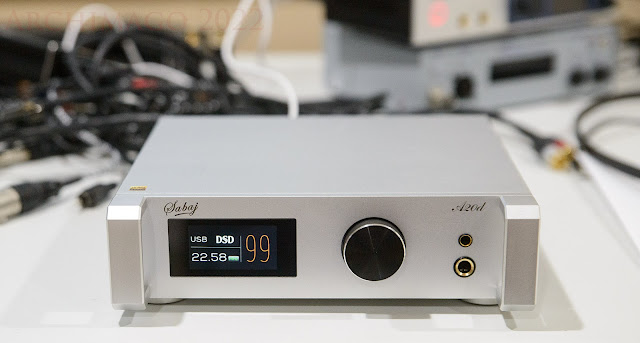 As we end off Part II with a detailed look at PCM fidelity, I can say that from an objective fidelity perspective, basically what I'm seeing is an ESS ES9038PRO-based DAC that's performing on par with the best devices available today as published here and on other audiophile objective measurement sources. The XLR 4.77Vrms output is clean with dynamic range of 130dB and 0dBFS THD+N better than -123dB. In a similar way, the RCA 2.35Vrms unbalanced output gives us an excellent THD+N of -120dB. On my more complex Triple-Tone signal, I'm seeing a TD+N of -118dB through the XLR and -111dB through the RCA which are again excellent.

Since I'm basically "throwing the book" of measurements at this device, we can see that certain characteristics are the result of the ESS DAC chip itself. For example the "hump" (THD and IMD) between -45 to -25dBFS or so, and the sinusoidal pattern of odd harmonic distortions when examined in very close detail with 0.1dB steps using a low-noise notch filter.

I noticed that Sabaj A20d 2022 did a good job with keeping the THD+N reasonably consistent across sample rates. The Topping D90SE showed excessive 3rd harmonic distortion once you increased sample rate to 176.4+ (shown here; word on the street is that recent firmware updates did not improve this). While the Sabaj performed significantly better, 3rd harmonic compensation may still be tweaked at 352.8kHz and above. Note that this is an extreme perfectionistic nitpick since that 3rd harmonic is down at around -130dBFS already!

Overall, this is a phenomenal performance level for a modern PCM DAC for both RCA and XLR line-level outputs.

We're not done yet, dear audiophiles! In Part III, we'll continue to explore DSD performance, the headphone output, and I'll get you an AMPT recording to have a listen. Of course, let's also discuss music playback for subjective impressions and close off with a final summary.

I just wanted to note that Windows 11 22H2 is out on the preview channel. If you've ever had issues with Windows 11 slowing down over time as I have noticed on occasion since the initial release on my AMD Ryzen 9 3900X machine, do give this update a try. There are other changes here and there with this new version, but it's the speed improvement that was essential for me! 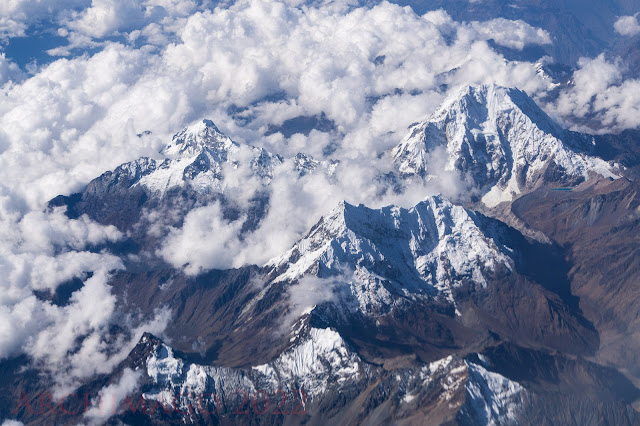 A view of the Andes. 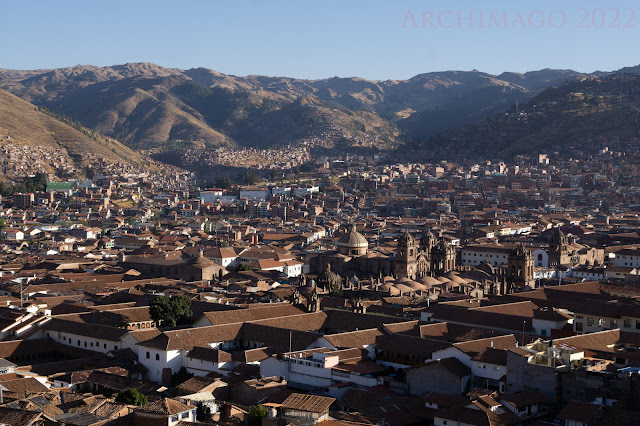 Greetings from Cusco, Peru, friends! Obviously I got these measurements and most of the write-ups done prior to some vacation time. Heading on the Inca Trail for a multi-day trek through the mountains towards Machu Picchu over the next few days... Time for some electronics detox.

Obviously way more to life than work and audio! ;-)

Hope you're all enjoying wonderful music.